The vila PRELIUDIJA is located in the very centre of the Old Town of Klaipeda, Kepeju str. 7. The house is a monument of architecture first mentioned in written sources back in 1856. The vila PRELIUDIJA has 5 double rooms and 1 luxury room, all modern utilities, internet and a cosy atmosphere. It has everything to meet the most demanding guest or businessman. The Theatre Square, favored by all tourists, is nearby the guest house and so is the old ferry, plenty of cafes and restaurants, galleries and museums.

Klaipeda (Memel) is the third city of Lithuania. It’s population exceeds 200 000 inhabitants and it is the oldest self-governed city in Lithuania . Klaipeda city is situated along he shores of the Baltic Sea and the Curonian Lagoon and it saddles both banks of the river Dane. The city was found in 1252 after the Livonia Order and the bishop of Curonia had signed an agreement of Memelburg castle and the city building. Since then Klaip eda was ruled by Russia , Prususia , France , Germany , Sweden and Lithuania . Klaip eda became an important economic, politic , cultural area and is the fastest growing industrial and transportation center in the Baltic States due to the ice-free seaport, excellent land transportation network , investments , university and developing cooperation with European Union. 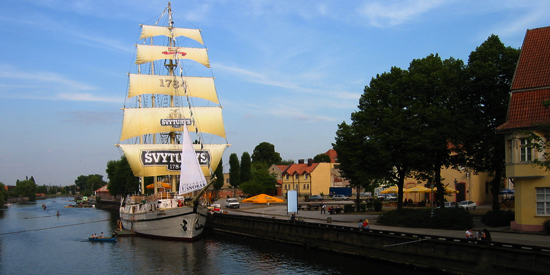 There are many museums in the city : Art gallery , History museum of Lithuania Minor , Smithery museum of Lithuania Minor , Clock museum , Lithuanian sea museum and dolphinarium , etc. Every summer the city is crowded with visitors and becomes the „ summer capital “ of Lithuania . Klaip eda visitors have vast possibilities of having good time along the seashore , in the Curonian Spit and in Palanga. Festivity fever takes over the city in the end of July . The most exciting Lithuania‘ s festivity – Sea Festival is celebrated in Klaip eda at that time . The city is once again immersed into emotional merriment when the time comes for Klaip eda anniversary carnival on the 1 st of August . You are very welcome to visit Klaipeda .